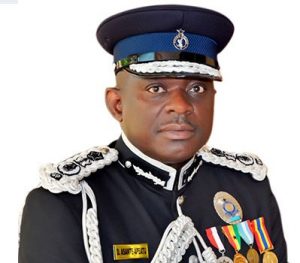 Asante-Apeatu pursued a Master of Science degree in Chemistry at the Kharkov State University in Ukraine, graduating in 1985.Upon returning to Ghana, he enrolled at the Ghana Police Academy in Accra from 1988 to 1990, where he graduated with a Certificate in Police Duties. He proceeded to Ghana Institute of Management and Public Administration (GIMPA) in 1993, where he obtained a Certificate in General Management. He obtained a Certificate in Criminal Justice Administration from the University of Virginia in 2002.To improve his administrative skills, he enrolled at GIMPA in 2011 for an Executive Master of Business Administration, graduating in 2013. When Asante-Apeatu returned from the USSR, he was employed as an Inspector of Factories, Shops and Offices by the Ministry of Labour and Social Welfare in Accra from 1985 to 1988. After graduating from the Police Academy in 1990, he was made the District Police Officer of the Tumu District of Upper West Region of Ghana.In 1991 he was appointed the Government Analyst at the Forensic Laboratory of the Ghana Police Service. In 2007 he moved to Lyon, France, where he was appointed the Director of Specialised Crime and Analysis at Interpol headquarters.He worked in various departments of police service, including Operations Officer of the Criminal Investigation Department, Director General of the CID, Director General, Research and Planning, Director General for Information Communication Technology Department, and Head of the Marine Police.

Asante-Apeatu worked in Bosnia-Herzegovina as a United Nations Task Force instructor at the Sarajevo Police Academy. He taught courses in Human Dignity, Police Ethics, and Criminal Investigations from 1997 to 1998. He served as team leader in Homicide Investigation at the request of the United Nations Mission in Liberia and did so again in The Gambia during the investigations into the mass murder of more than 50 people, mostly West African nationals.

He has led several investigations in Ghana which have led to the arrest and conviction of offenders. He was the lead investigator in a series of murders in Accra in 1988 that left 30 women dead; this resulted in a suspect being apprehended, found guilty, and sentenced to death. He also oversaw a police operation that led to the seizure of 588 kilograms (1,296 lb) of cocaine with a street value of about USD$38 million. He also investigated the murder of Ya-Na Yakubu Andani, overlord of Dagbon, and the murder of Roko Frimpong, a vice president of the Ghana Commercial Bank.

Click one of our representatives below to chat on WhatsApp or send us an email to info@agileinafrica.com

× How can I help you?
We use cookies to ensure that we give you the best experience on our website. If you continue to use this site we will assume that you are happy with it.Ok